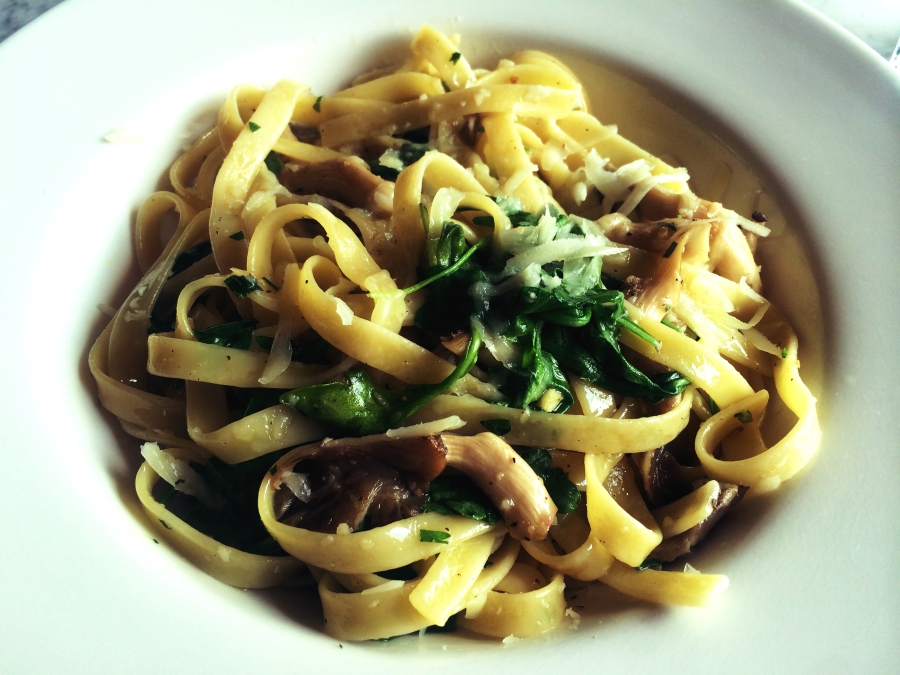 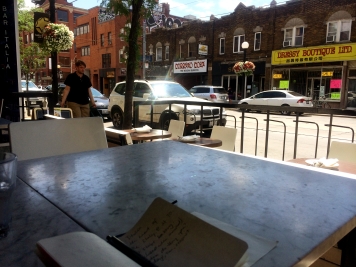 It’s a nice day and I had some free time to kill so why not right? Bar Italia was not on my list for Summerlicious this year. I just felt like eating Italian so there I was. I came in quite early for my meal but of course that only leaves me with better options of where to sit. I chose to sit on their patio. The breeze was quite nice, shaded and from where I was sitting you can see people’s reflection on a blue plastic banner showcasing the restaurant’s name. Every once in a while some people would stop by and engage in conversation in front of the restaurant for a few minutes then go on to their separate ways. No, I wasn’t eaves dropping on their conversations. That would just be rude! As these strangers stop by it reminded me so much of how fond I am of good conversations. Conversations for hours on end from one topic to the next. A never-ending gabfest filled with laughter, curiosity, openness, stories and a warm embrace farewell until our next meeting.

The black metal railings encasing the patio area in itself and the ambiance that Bar Italia exuded, for me, was completely how I remember Italy. It’s an Italian restaurant so duh it should remind me of that right? I wish I could say that, that is an adequate generalization when you go to culturally cuisine specific restaurants but it’s not. I’ve been to some places with amazing food yet it still feels like where I was exactly-a restaurant. Sitting on the patio of Bar Italia transported me back to the same pizza parlour my friends and I ate at during our brief visit at Rome and Florence. I have this faint image of one of my friends in my head with her sunglasses tucked in her long dark brown hair like a headband sipping a cappuccino while telling us how much she doesn’t want to go back to Toronto. At that moment, she said exactly how we all were feeling. I told my server today that Florence felt like my second home and I still feel like that today. Perhaps, some time, hopefully in the near future it will be. For now, may be a stroll down Little Italy will suffice. 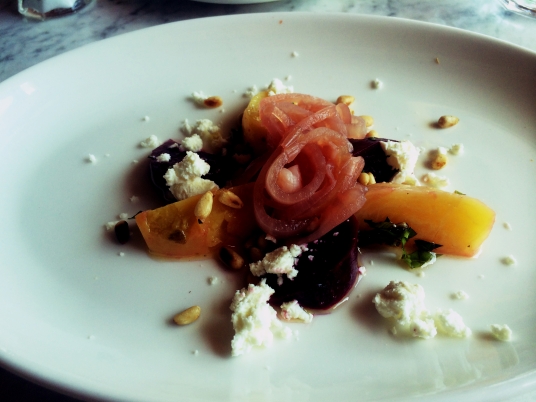 Did you think I would forget talking about the food? Nope! I had the Insalata Con Capra e Barbabietole (beets salad) to start, Fettuccine Capricciose as my main and Tiramisu for dessert. I should mention that I requested for my server to tell me what she would pick out of the Summerlicous menu. I was pleasantly surprised to learn that at this restaurant, they encourage their servers to taste their food and to be very informative in terms of how the restaurant functions and produce their dishes. Again, not all restaurants do this. They should but they don’t. I’ve eaten at some places and would ask the same question of preference but some servers would not have an opinion about it or would not be able to tell me that, hey we actually make the marinara sauce for this sandwich or that we have a private bakery above our restaurant that makes our baked goods specifically. By the way, those are real examples of some of the things that Bar Italia does and what a treat that is!

Speaking of treats…my server, Hawley, warned me about the Tiramisu. She was very explicit that their Tiramisu will leave you wanting more and more. I can see why she says that! If you’ve never had Tiramisu it’s a layered dessert usually made by layering ladyfingers previously soaked with coffee, chocolate (usually powder) and mascarpone. It’s not necessarily a sweet dessert because of the coffee nonetheless it delivers that satisfying indulgence when eating desserts. I enjoyed eating Bar Italia’s Tiramisu. The mascarpone definitely hit the spot for me! Sometimes people do add sugar to combat the bitterness of the coffee flavour but this goes to show that you don’t really need to. Granted I think they did add some sugar but it was virtually undetectable. The creaminess of the mascarpone is what lingered. And it was a nice touch to have a few pieces of blueberries. The blueberry bursts in your mouth soothing the creamy mascarpone while hints of coco and powdered sugar dusted on the plate completes your bite. It was a shame that the dessert wasn’t bigger but it definitely delivered because you just keep wanting for more. Oh what a clever glimpse of bliss it was. And perhaps it ended as it should. A glimpse of my past during my present while giving me hope for the future. I’m coming back for you Italia, soon.