I’ve been sick for about 4 days now but it wasn’t until yesterday evening that I finally gave in to drinking turmeric teas. My mom has been telling me to drink it since she was so impressed with how fast she recovered from a sore throat. After telling me the ingredients in the tea I decided to add raw garlic into the mix since it’s going to taste a little funky anyway. 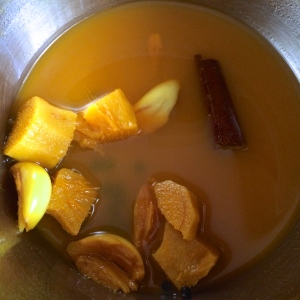 In a small saucepan, put all of the ingredients one by one before adding the water. I bruised the ginger and garlic before putting it in the saucepan to help release the oils. Then pour in about 3-4 cups of water and let it simmer. Stir the mixture a few times then turn off the stove once the water reaches its boiling point. I mixed in the honey individually every I poured in some of the mixture in my mug.

Just to warn you guys, it’s quite pungent BUT it was a great immune system booster and sore throat healer! After drinking a couple of mugs of the tea, I went to bed and woke up feeling much better. Also, I was a little concerned at first that the turmeric would stain my teeth but it hasn’t.

Do you have a secret recipe for fighting colds, flus and sore throats? Feel free to share with us by leaving a comment below! 🙂

Health Food Facts about the ingredients in this tea: